There is a wide-spread belief, particularly in the West, that the ideal of the Theravada, which they conveniently identify with Hinayana, is to become an Arahant while that of the Mahayana is to become a Bodhisattva and finally to attain the state of a Buddha. It must be categorically stated that this is incorrect. This idea was spread by some early Orientalists at a time when Buddhist studies were beginning in the West, and the others who followed them accepted it without taking the trouble to go into the problem by examining the texts and living traditions in Buddhist countries. But the fact is that both the Theravada and the Mahayana unanimously accept the Bodhisattva ideal as the highest.

The terms Hinayana (Small Vehicle) and Mahayana (Great Vehicle) are not known to the Theravada Pali literature. They are not found in the Pali Canon (Tripitaka) or in the Commentaries on the Tripitaka. Not even in the Pali Chronicles of Ceylon, the Dipavamsa and the Mahavamsa. The Dipavamsa (about the 4th Century A.D.) and Pali Commentaries mention Vitandavadins, evidently a sect of dissenting Buddhists holding some unorthodox views regarding some points in the teaching of the Buddha. The Vitandavadin and the Theravadin both quote the same authorities and name the sutras of the Tripitaka in order to support their positions, the difference being only in the mode of their interpretations. The Mahavamsa (5th Century A.D.) and a Commentary on the Abhidhamma refer to Vetulla – or Vetulyavadins (Sanskrit: Vaitulyavadin) instead of Vitandavadin. From the evidence of the texts, it may not be wrong to consider that these two terms – Vitanda and Vetulya – represented the same school or sect.

So we can be certain that the terms Vitanda, and Vetulya used in the Pali Chronicles and Commentaries refer to Mahayana. But the terms Hinayana and Mahayana were not known to them, or ignored or unrecognised by them.

It is universally accepted by scholars that the terms Hinayana and Mahayana are later inventions. Historically speaking, the Theravada already existed long before these terms came into being. That Theravada, considered to be the original teaching of the Buddha, was introduced to Ceylon and established there in the 3rd Century B.C., during the time of Emperor Asoka of India. At that time there was nothing called Mahayana. Mahayana as such appeared much later, about the beginning of the Christian Era. Without Mahayana there could not be Hinayana. Buddhism that went to Sri Lanka, with its Tripitaka and Commentaries, in the 3rd Century B.C., remained there intact as Theravada, and did not come into the scene of the Hinayana-Mahayana dispute that developed later in India. It seems therefore not legitimate to include Theravada in either of these two categories.

The Mahayana mainly deals with the Bodhisattva-yana or the Vehicle of the Bodhisattva. But it does not ignore the other two: Sravaka-yana and Pratyekabuddha-yana. For example, Asanga, the founder of the Yogacara system, in his Magnum Opus, the Yogacara Bhumisastra, devotes two sections to Sravaka-bhumi and Pratyekabuddha-bhumi to Bodhisattva-bhumi, which shows that all three yanas are given due consideration in the Mahayana. But the state of a Sravaka or a Pratyekabuddha is inferior to that of a Bodhisattva. This is quite in keeping with the Theravada tradition which, too, holds that one may become a Bodhisattva and attain the state of a fully Enlightened Buddha; but if one cannot, one may attain the state of a Pratyekabuddha or of a Sravaka according to one’s capacity. These three states may be considered as three attainments on the same Path. In fact, the Sandhinirmocana Sutra (a Mahayana Sutra) clearly says that the Sravakayana and the Mahayana constitute one yana (ekayana) and that they are not two different and distinct ‘vehicles’.

Now, who are these three individuals: Sravaka, Pratyekabuddha and Bodhisattva? Very briefly: 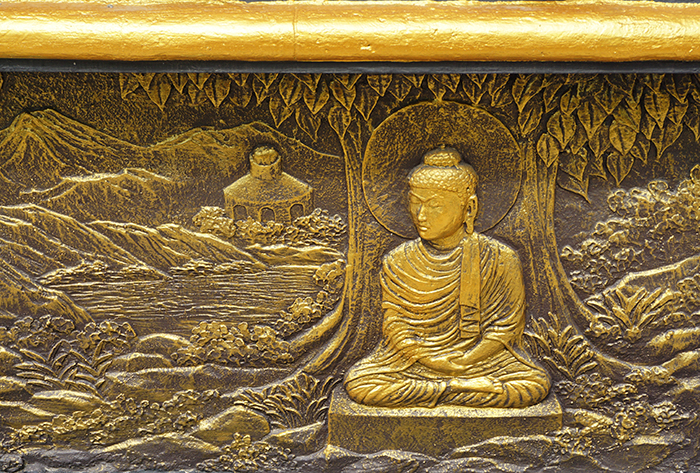 From this we can see that anyone who aspires to become a Buddha is a Bodhisattva, a Mahayanist, though he may live in a country or in a community popularly and traditionally regarded as Theravada or Hinayana. Similarly, a person who aspires to attain Nirvana as a disciple is a Sravakayanika or Hinayanist though he may belong to a country or a community considered as Mahayana. Thus it is wrong to believe that there are no Bodhisattvas in Theravada countries or that all are Bodhisattvas in Mahayana countries. It is not conceivable that Sravakas and Bodhisattvas are concentrated in separate geographical areas.

Further, Asanga says that when a Bodhisattva finally attains Enlightenment (Bodhi) he becomes an Arahant, a Tathagata (i.e. Buddha). Here it must be clearly understood that not only a Sravaka (disciple) but also a Bodhisattva becomes an Arahant when finally he attains Buddhahood. The Theravada position is exactly the same: the Buddha is an Arahant – Araham Samma-SamBuddha – “Arahant, Fully and Perfectly Enlightened Buddha.”

The Mahayana unequivocally says that a Buddha, a Pratyekabuddha and a Sravaka (disciple), all three are equal and alike with regard to their purification or liberation from defilements or impurities (Klesavaranavisuddhi).

This is also called Vimukti-Kaya (Liberation-body), and in it there is no difference between the three. That means that there are no three different Nirvanas or Vimuktis for three persons. Nirvana or Vimukti is the same for all. But only a Buddha achieves the complete liberation from all the obstructions to the knowable, i.e., obstructions to knowledge (Jneyyavaranavisuddhi), not the Sravakas and Pratyekabuddhas. This also is called Dharma-Kaya (Dharma-body), and it is in this and many other innumerable qualities, capacities and abilities that the Buddha becomes incomparable and superior to Sravakas and Pratyekabuddhas.

This Mahayana view is quite in keeping with the Theravada Pali Tripitaka. In the Samyutta-Nikaya the Buddha says that the Tathagata (i.e. Buddha) and a bhikkhu (i.e. sravaka, disciple) liberated through wisdom are equal with regard to their Vimutta (liberation), but the Tathagatha is different and distinguished from the liberated bhikkhus in that he (Tathagata) discovers and shows the Path (Magga) that was not known before.

These three states of the Sravaka, the Pratyekabuddha and the Buddha are mentioned in the Nidhikanda Sutta of the Khuddakapatha, the first book of the Khuddaka-nikaya, one of the five Collections of the Theravada Tripitaka. It says that by practising virtues such as charity, morality, self-restraint, etc., one may attain, among other things, “the Perfection of the Disciple” (Savaka-Parami), “Enlightenment of the Pratyekabuddha” (Paccekabodhi) and “the Buddha-domain” (Buddhabhumi). They are not called Yanas (vehicles).

In the Theravada tradition these are known as Bodhis, but not Yanas. The Upasaka-janalankara, a Pali treatise dealing with the ethics for the lay Buddhist written in the 12th century by a Thera called Ananda in the Theravada tradition of the Mahavihara at Anuradhpura, Sri Lanka, says that there are three Bodhis: Savakabodhi (Skt: Sravakabodhi), Paccekabodhi (Skt: Fratyekabodhi) and Sammasambodhi (Skt: Samyaksambodhi). A whole chapter of this book is devoted to the discussion of these three Bodhis in great detail. It says further that when a disciple attains the Bodhi (Enlightenment), he is called Savaka-Buddha (Skt: Sravaka-Buddha).

Just like the Mahayana, the Theravada holds the Bodhisattva in the highest position. The Commentary on the Jataka, in the tradition of the Mahavihara at Anuradhapura, provides a precise example: In the dim past, many incalculable aeons ago, Gotama the Buddha, during his career as Bodhisattva, was an ascetic named Sumedha. At that time there was a Buddha called Dipankara whom he met and at whose feet he had the capacity to realise Nirvana as a disciple (Sravaka). But Sumedha renounced it and resolved, out of great compassion for the world, to become a Buddha like Dipankara to save others. Then Dipankara Buddha declared and predicted that this great ascetic would one day become a Buddha and offered eight handfuls of flowers to Sumedha. Likewise, Dipankara Buddha’s disciples who were with him and who were themselves Arahants offered flowers to the Bodhisattva. This story of Sumedha distinctly shows the position a Bodhisattva occupies in the Theravada.

Although the Theravada holds that anybody can be a Bodhisattva, it does not stipulate or insist that all must be Bodhisattva which is considered not practical. The decision is left to the individual whether to take the Path of the Sravaka or of the Pratyekabuddha or of the Samyaksambuddha. But it is always clearly explained that the state of a Samyaksambuddha is superior and that the other two are inferior. Yet they are not disregarded.

In the 12th Century AD., in Myanmar (a strictly Theravada country), King Alaungsithu of Pagan, after building Shwegugyi Temple, set up an inscription in Pali verse to record this act of piety in which he publicly declared his resolution to become a Buddha and not a Sravaka.

A Thera named Maha-Tipitaka Culabhaya who wrote the Milinda-Tika (about the 12th Century AD.) in the Theravada tradition of the Mahavihara at Anuradhapura, says at the end of the book in the colophon that he aspires to become a Buddha: Buddho Bhaveyyam “May I become a Buddha,” which means that this author is a Bodhisattva.

We come across at the end of some palm leaf manuscripts of Buddhist texts in Sri Lanka the names of even a few copyists who have recorded their wish to become Buddhas, and they too are to be considered as Bodhisattvas. At the end of a religious ceremony or an act of piety, the bhikkhu who gives benedictions, usually admonishes the congregation to make a resolution to attain Nirvana by realising one of the three Bodhis – Sravakabodhi, Pratyekabodhi or Samyaksambodhi – as they wish according to their capacity.

The Venerable Dr. Walpola Sri Rahula (1907–1997), was a Buddhist monk (bhikkhu), scholar and writer from Sri Lanka. He received the traditional monastic training and education in Buddhism in Ceylon. In 1964, he became the Professor of History and Religions at Northwestern University, thus becoming the first bhikkhu to hold a professorial chair in the Western world. He also once held the position of Vice-Chancellor at the then Vidyodaya University (now University of Sri Jayewardenepura). He is the author of What the Buddha Taught and The Heritage of the Bhikkhu. He has written extensively about Buddhism in English, French and Sinhalese.